The Roman Impact on Ancient Britain

Available on Mondays and Wednesdays.

To extend your groups learning beyond the session why not download our resource pack or ask a member of museum staff if you can book the gallery explorer kit. These resources can be view by clicking here.

To make an enquiry please email us or complete the online enquiry form.

*Make a donation to support the learning programme.

Using our handling collection, roundhouse model and reconstruction of Benwell Roman Fort the students will investigate how Roman 'Roman Britain' actually was.

The main learning objectives for this workshop are: 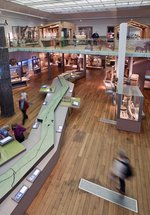